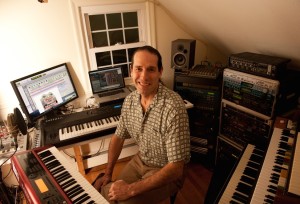 “Music is the sound of emotion, and humans are emotional creatures. Making this connection has been my work, my joy and my obsession. The right composition, played at the right time, on the right instrument can create moments of great and lasting significants. I live for those moments.”

Tony Silva’s music compositions include over 40 commissions for modern dance, theater, documentaries and live performance. The past three films he scored won awards at film festivals.

Tony grew up in New York City in an artist colony called Westbeth where he learned to play a wide variety of instruments. He started composing at age 20, received his first commission in 1990, and is a member of ASCAP.

He earned a BFA 1994 from the University of Massachusetts where he studied music theory and history. He was also a composition student of the award winning composer, Charles L. Bestor, and continues to study music composition with Clifton “Jerry” Noble.

Tony has 2 CDs available: Island Film’s “Artists of the Bahamas” music from the documentary series, and “Zen Garage,” a collection of meditative music for relaxation and yoga featuring Perry Yung on Shakuhachi, Jonathan Keezing playing Celtic Harp and Tony Silva on percussion and chimes.

“All the works on (Le Minh Tam’s) thoughtfully conceived program were enhanced by scores by Mr. Silva, who combined electronic sounds with music for various string and wind instruments, played by him.  What one heard always strengthened the impact of what one saw.”